A Day of Zen

I can’t tell you how much I needed a weekend at home. In Denver that is. Don’t get me wrong, I love snow skiing and the convenience of having mountains in your back yard, but sometimes you need a break. So, you can do other things like yoga. 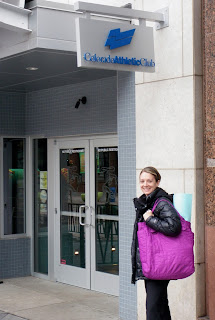 Yup. Mr. B and I went to your first yoga class together at our new gym, The Colorado Athletic Club. We have never done anything yoga related so we were really pumped to try it out. The class was unfortunately at 8:15 this morning.  We ate gumbo and drank wine into the wee hours last night which seemed like a good idea at the time but not so much at 7:30 this morning. Definitely hit the snooze button a couple of times. (Okay you win, it was five)

But we managed to get our lazy butts out of bed and made it to class just as the instructor walked through the door. He apologized for being late and said that he was a little under the weather. Mr. B and I turned to each other (cough…BS, cough…BS).

Anyways, we rolled out our mats and got to work. Mind you we had no clue what we were doing. We weren’t even dressed properly. I wore my Nike running pants and a t-shirt and so did Mr. B. People were staring. In attempt to blend in I grabbed some blocks from the prop area. Mr. B asked what these were for and I was like, I don’t know but everyone else has them so act like you know what to do with them.

Like I said, we had no idea what we were doing. We spent the entire class looking around the room trying to form the poses correctly. Eyeballing the person in front of you doing the downward dog is really awkward. Thank GOD we weren’t the only first timers. There was a horribly awkward couple in front of us. I don’t if they were married but he was being a dumbass the entire time and she was getting all fired up because he wasn’t taking it seriously. Mr. B and I couldn’t help but chuckle.

All in all we did have a great time. We couldn’t believe how much work it takes to stay in the poses. Our cores and quads were sore when we finished. 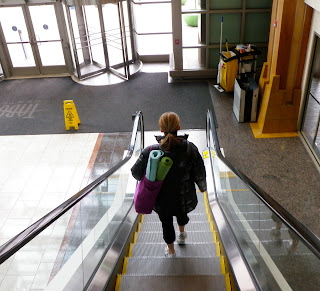 After class we headed to the Delectable Egg for some much needed grub. Who knew you could work up an appetite doing a child’s pose?
Mr. B ordered a breakfast burrito with green chili and I had a Mexican omelet. Delish.

Since we have a full day in front of us I am not sure what we have planned.  But, I have a feeling that a comfy couch and movies will be in the picture some how.
Denver Restaurants Yours Truly