I experienced an FFO last night. Yep. I had a Foodie Freak Out. Bret and I went to TAG last night to celebrate our three year wedding anniversary, and man, the food was out of this world! I have been dying to go to this restaurant ever since it opened last year, but didn’t have a good excuse to go until now. 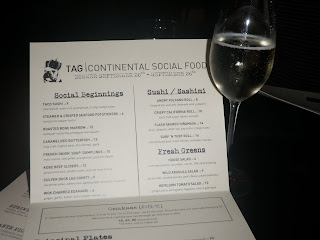 We started off with an appetizer that I have never tried before. Bone Marrow. Don’t freak out, it looks really weird and unappetizing, but I am telling you, it was like butter. If you’ve ever had foie gras before, imagine that taste but a million times better. (Side note: sorry these pictures aren’t clear, I didn’t have Bret’s Japanese tourist camera with me, so I had to take pics with my iphone. My deepest apologies.) 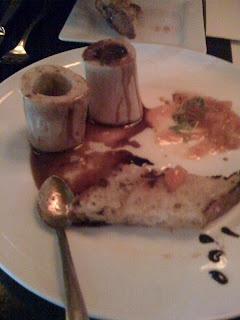 After that tasty explosion, we decided to do a bunch of small plates instead of main courses. We thought by doing this it would give us a better taste of the menu. Next favorite, Kobe sliders with fries. These weren’t normal sliders. These sliders had a Gorgonzola aoli and fries that were cooked in duck fat and sprinkled with sugar….OMG! I can’t even describe to you how decadent they were. I can still taste them. 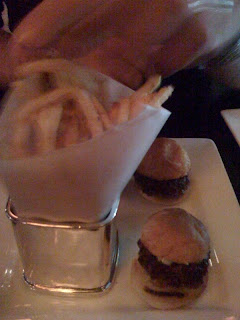 We couldn’t just end the meal on duck fat and burgers, that would just be crazy. So, we ordered dessert like good Americans. Hmmmm….what to get. Let’s go with ice cream, since nothing else was going to fit into our bellies.
Of course, this was no ordinary ice cream…oh, no. This ice cream, was lip smacking, finger licking, wrong on so many levels, good. The server brought us several flavor options: honeycomb, fruity pebbles, and cocoa crisps. I know! It was off the charts and tasted exactly like the cereal. 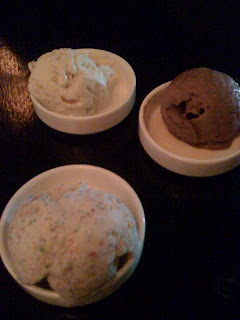 I left TAG with the biggest smile on my face. I can’t wait to go back!
Denver Restaurants