Geez….can you believe it’s Saturday already? I mean really where does the time go.

Anyways, Mr. B and I started our Saturday off in the usual fashion with brunch. We decided to eat at The Gallop Cafe because their food is quick, easy, and always delicious. 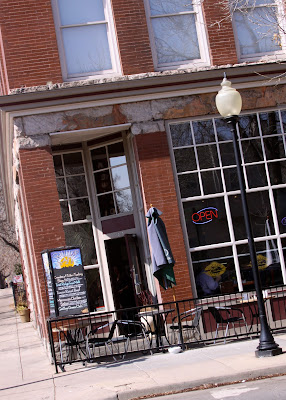 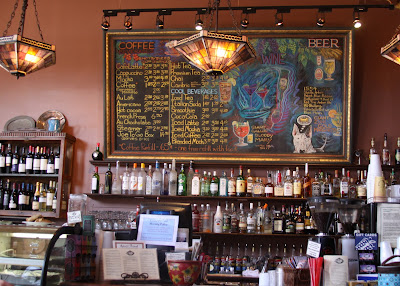 Between the two of us, someone either orders the breakfast burrito or the four corners tortilla wrap. I went with the wrap because I was craving something spicy.
Inside the wrap: egg, bacon, avocado, potato, cheese and lots of sliced jalapenos!
Talk about kicking off the weekend. Whew bessie, it- was-a-spicey. 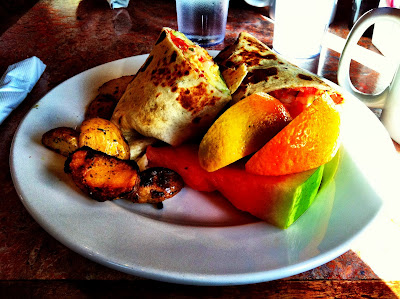 After brunch, we headed to REI to pick up my ski boots. I have been waiting since October 12th to get my new setup (skis and bindings) back from REI. The reason it is taking so long is because of the manufacturer. Since the heel on my ski boot is warn they have to replace it with a new one. Well, long story short, it will be another week before the part comes in and they can fix it.
Annoying, but what can ya do. Since we are skiing tomorrow, I told them to call me when the part is in so I don’t have to keep brining my boots back. They obliged.
Once we were done with REI, we jetted over to Sports Authority to look for some new ski attire for Mr. B. He definitely needs an upgrade.
We found a couple of items:
– neon yellow pants from North Face
– jacket from Burton
– brown hoodie from North Face
– grey and black pants from Burton 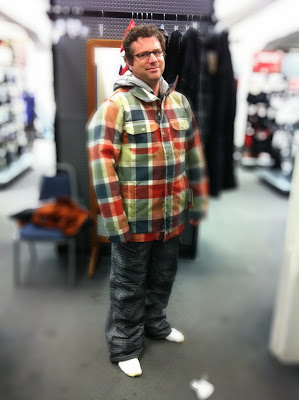 We decided to wait on the jacket and get the rest, but we ran into a problem when we were checking out. Mr. B had the gift card on his phone, well apparently, it was for online use only. What? Um, Sports Authority, why can’t you scan the bar code? You and Apple need to have a talk.
By the time we were done running errands, it was game time!
Our Kansas State Kitties were taking on the Oklahoma State Cowboys.
We decided to watch the game at home because let’s face it, DVRing is the best thing, and it’s cheaper.
Beer, yes please! 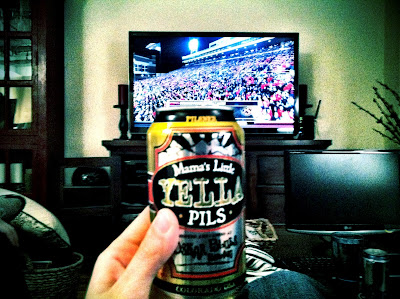 I was nervous all day for this game.  I knew we were either going to hang with them the entire game, or it was going to be blow out!
The first 10 minutes looked like a blowout was brewing, but then everything changed.  The offense started clicking and we were controlling the game.  A few well timed turnovers really got the game rolling and BOOM, Cats up by 7 going into the locker room at the half.
We were starving by halftime and Illegal Pete’s sounded perfect.  The best thing about Illegal Pete’s?  They mix up the burrito ingredients!  It’s the simple things in life, right? Right.  I wasn’t feeling like tackling a pound of burrito filling so the carnita tacos were calling my name.
Hello, beautiful! 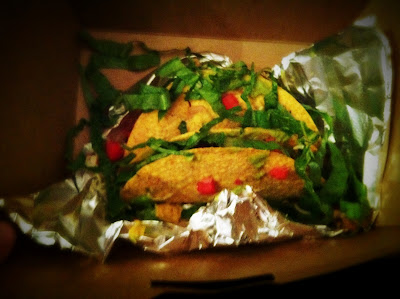 Okay, back to the game.
I was worried that the second half was going to be ugly, but I was wrong. We played amazing. Collin Klein (our quarterback, A.K.A the “real” honey badger, not the LSU guy) rushed for 144 yards and passed for 230. Our offensive was on fire! I am pretty sure he was playing with a broken rib, but he never gave up.  Our boys hung in there and fought it out until the last second, literally.  They drove down to the 5 yard line with 12 seconds left and no timeouts.  Ruh-Roh Shaggy!
Unfortunately, the game didn’t turn out in our favor. We needed a touchdown to send the game into overtime, but the three attempts weren’t enough tonight.  Guess it just wasn’t meant to be.  We didn’t come home with the W, but that was a fun game to watch.
I have never been so proud of our Kitties. Did you know that Oklahoma State’s offense was only on the field for 19 minutes, and 11 seconds? That means the Bill Snyder was controlling this game the entire time. I just wish our defense would have played better.
And with that, I bid you good night!
P.S. Tonight is daylights savings! Don’t forget to turn your clocks back.
P.P.S. Thankful Challenge: Day 4
Sine Foodie Fridays was yesterday, I decided to double up today on the Thankful Challenge. For Friday, I am thankful for Uncle Nordies. I received my new grey boots in the mail, and unfortunately I guessed wrong on the size. Instead of shipping them back, I strolled down to the mall to see if they had my size in stock. Sure enough, they did!
P.P.P.S. Thankful Challenge: Day 5
Today I am thankful for college football. There’s something about sheering for your alma mater during an intense football game that makes you feel proud. Go CATS!
Denver Restaurants KSU Thankful Challenge