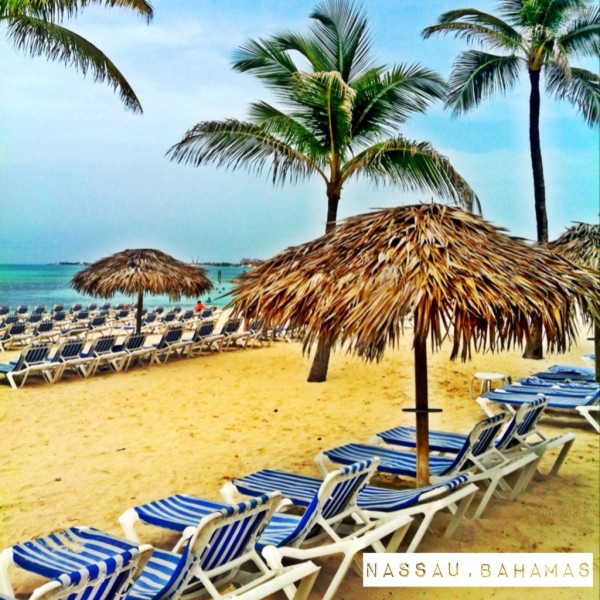 A couple of weeks ago, I traveled to Nassau.

This was my first time visiting the Caribbean islands of the Bahamas. Besides visiting Vieques, Puerto Rico, I’ve never spent much time down in the tropics, especially by myself! Mr. B wouldn’t be by my side because he was flying the opposite direction for business, so I knew I had to put on my big girl panties and cross international waters.

The reason for this entire tropical vacation was to spend the week celebrating the nuptials of my good friend, Melanie (Mel) and her now hubby, Edward (Edgie). I had never been to a destination wedding, so I had no idea what to expect, but let’s just say they left no detail untouched. What could have been a tricky situation (thankfully the storm gods kept tropical storm Chantal at bay) turned out to be a truly amazing week full of giggles, cocktails, and eventually, I do’s.

Let’s take a look back at the wedding week shenanigans, shall we?

I arrived Wednesday afternoon along with Kristin, Erica, Ali, and Katy. I went to high school with all of these chicas and since I didn’t go to my ten year reunion, we kind of celebrated a mini one in the Bahamas. We made it through customs with flying colors (phew) and hopped in a cab to the hotel. None of us realized at the time, but there is a huge money difference between cabs and buses in Nassau. It’s a $1.25 from the airport to the hotel on the bus versus $20 in a cab. 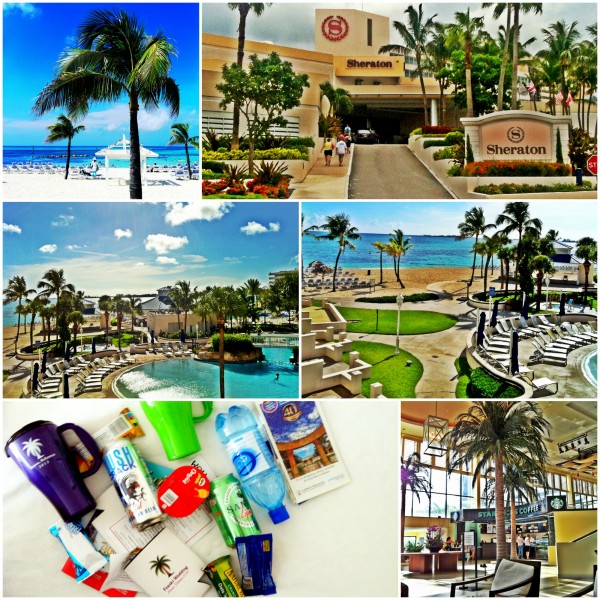 We arrived at the host hotel for the weekend, The Sheridan. The Sheridan isn’t Atlantis fancy, but still has comfortable beds, a Starbucks in the lobby, and great views. The only downside was the Internet situation. Only spotty wi-fi in the lobby, but as the hubs would say, why do you need to connect on vacation? I hate when he is right.

With the thought of Chantal heading our way on Friday, we immediately changed into our swimsuits and headed straight for a bite to eat on the beach. I ordered one of the local beers called Kaliak and fell in love. Light and refreshing along with a caprese sandwich. I was a happy camper!

After lunch we marinated on the beach and soaked up the rays. Is the water not gorgeous? 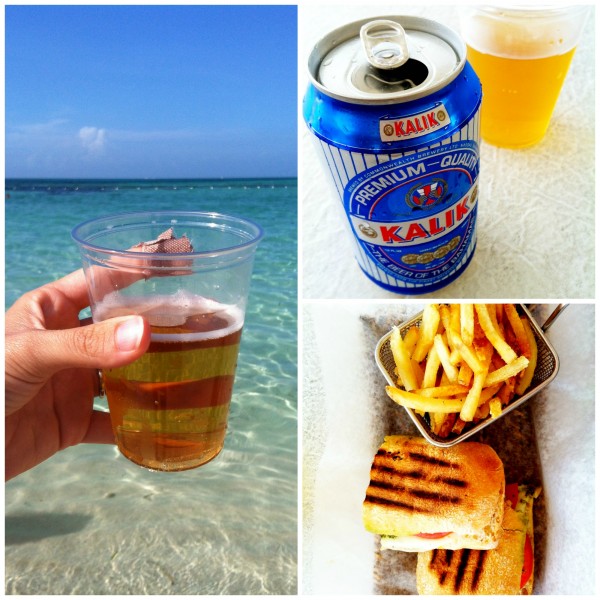 Since we had a late lunch, we decided to hang with Mel and Edgie up in their bridal sweet to meet other family and friends as we waited for the rest of the gang of to arrive. We watched the fireworks from the balcony as the Bahamians were celebrating their Independence Day! They are 40 years old. That’s like 6 months in Middle East years. 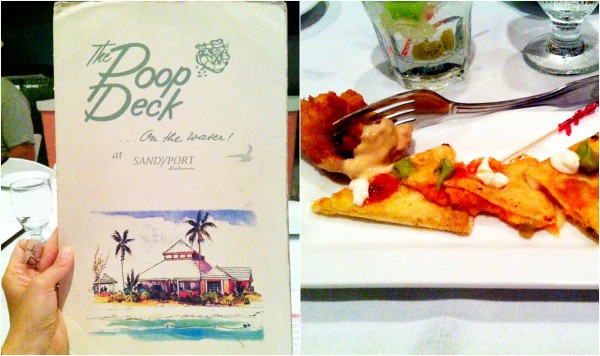 The whole gaggle headed to the Poop Deck for dinner. They were kind enough to keep the kitchen open even though we arrived at 9:59pm and they closed at 10pm. A bunch of us ordered the grouper tacos that turned out to be more of a fish quesadilla. Oh well! It’s not Mexico.

Thursday we were up and out the door to grab some essentials at the local market. Another $40 cab ride, but worth it because we didn’t want to carry back cases of beer and food. Although, I’m pretty sure our cab driver would have rather watched paint dry then cart our tookus’ around. Us girls can be so indecisive. 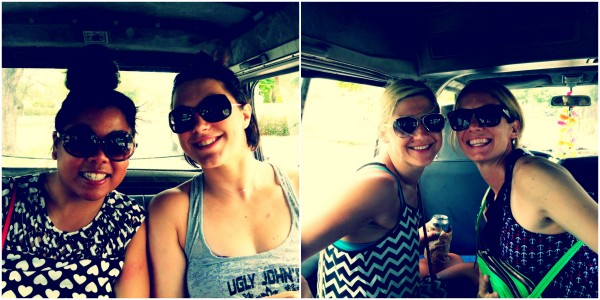 After our errands, it was time for the beach. Another beautiful day of fun in the sun! 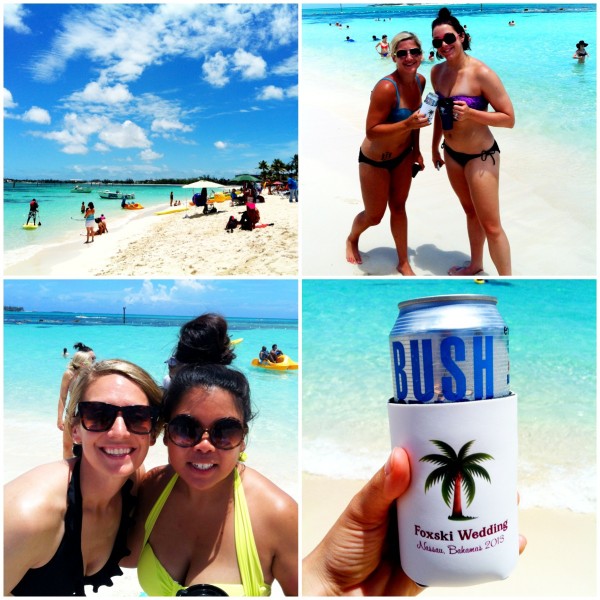 With over 80 family and friends attending this destination wedding, Mel and Edgie hosted a cocktail reception at the Spritz Restaurant and Bar. We sipped on fruity fun cocktails, ate delicious locally prepared food, and watched the sun set over the marina. Let the wedding weekend begin! 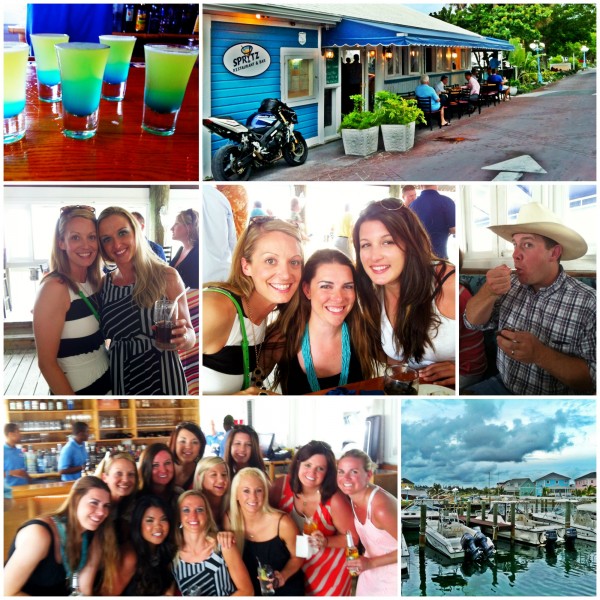 Since everyone was deep into the giggle juice, we thought stopping by Senor Frog’s was a genius idea. All I will say: 18 year-olds look like babies. Little, little babies dancing on stage. 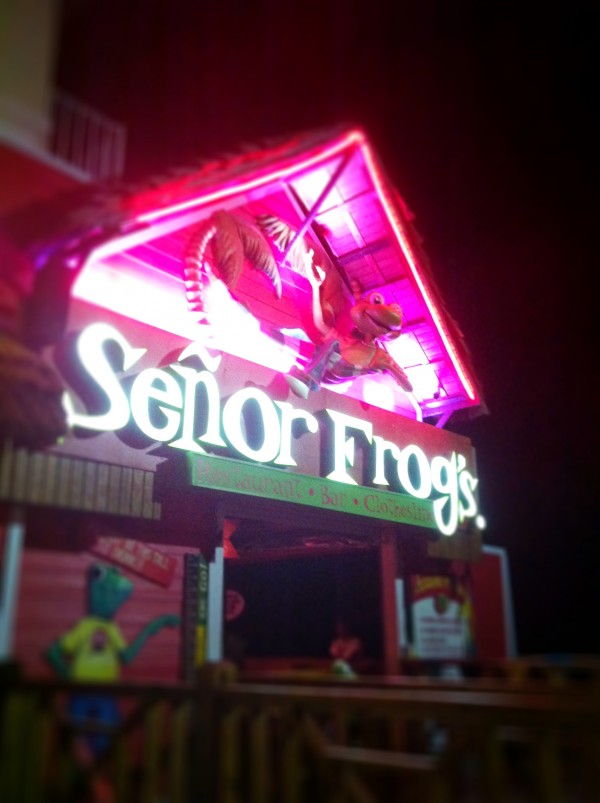 After our adventurous night at Senior Frog’s, we decided to sleep in and prepare for our Sandy Toes excursion. At this point everyone was banking on this activity being cancelled, but like I said, the storm gods blessed us and off we went! When we arrived at the check in point, there were eight of us that had to take the small jet boat out to the island because the main cruise boat was full already. Do wha? Nothing like going 40mph through large white caps to get the blood pumping! 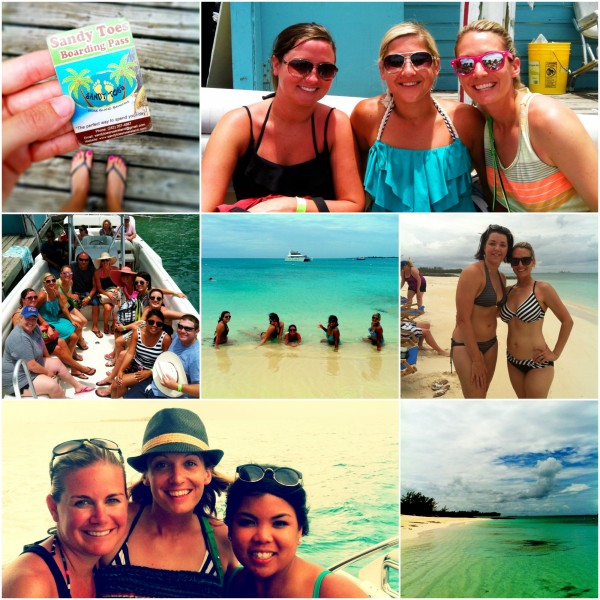 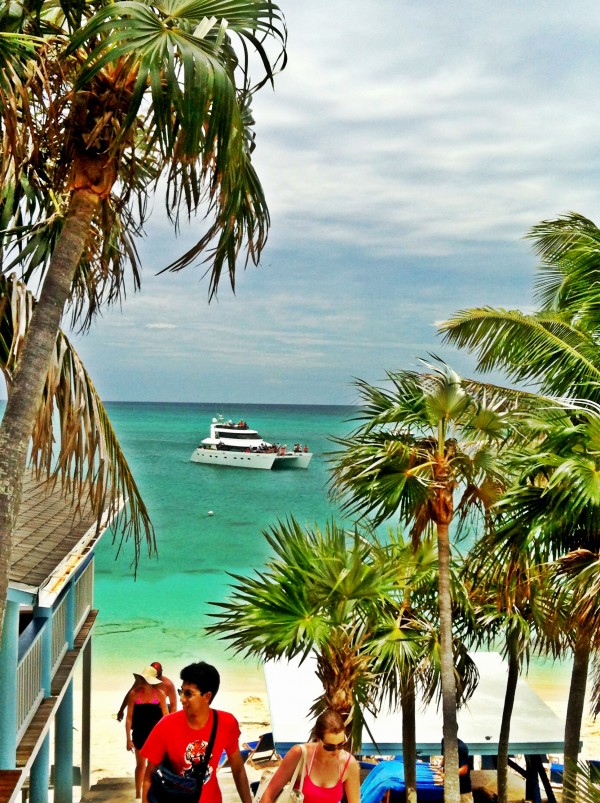 We arrived at the small, private island ready to lay on the beach and sip some rum cocktails. They had a wide variety of activities – snorkel, volleyball, and bean bags. I think we had a good hour before the heavens opened up and rained like a mother trucker. Like I always say, a bad day at the beach is a good day at the bar! Thankfully the clouds cleared by the time we got back on the boat. Nothing like watching the sun set with a fab group of friends! 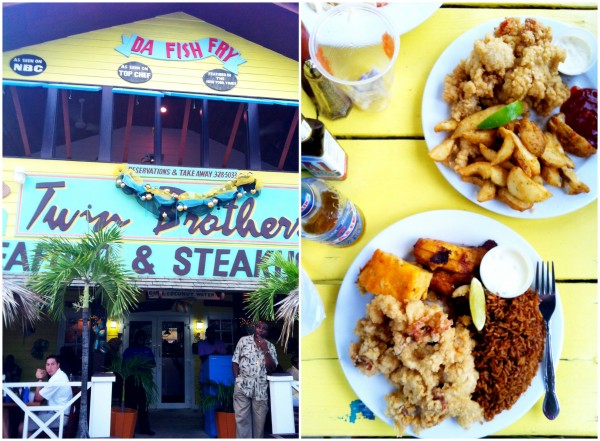 On our way back to the hotel, a group of us stopped by the Fish Fry for some fresh conch. Holy deliciousness! We ate at the Twin Brothers which was one of the many restaurants along the strip. Apparently, on Sundays the Fish Fry has live music and is the place to be. Next time!

Saturday, Katy, Erica, Jess, and I decided to run along the beach to downtown for a little shopping adventure. In the Bahamas they drive on the wrong side of the road so it was a little confusing as to which side to run on. Good thing we wore bright clothing! 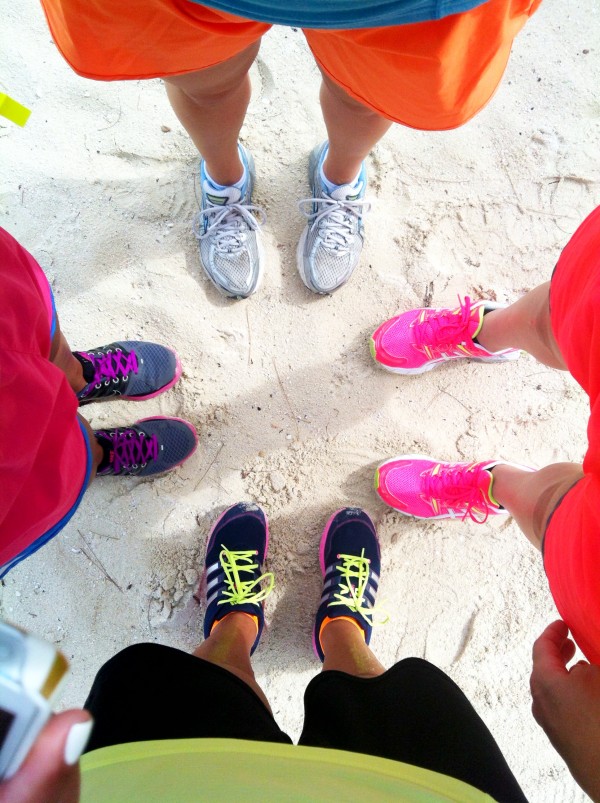 We eventually made it to town and grabbed some grub at the nearest cafe. Coffee and eggs? Yes, please! Once our bellies were full and a bazaar argument between three older senior citizens in the restaurant concluded, we were off to shop. Okay, here’s the 411 on the Straw Market. It’s an old building lined with vendors sitting every two inches full of nothing of but trinkets – shot glasses, bags, coffee mugs, etc. My advice if you are ever shopping there, go down one or two rows, pick out one or two things because the vendors are in your face constantly trying to sell you stuff. I seriously almost shanked a vendor. 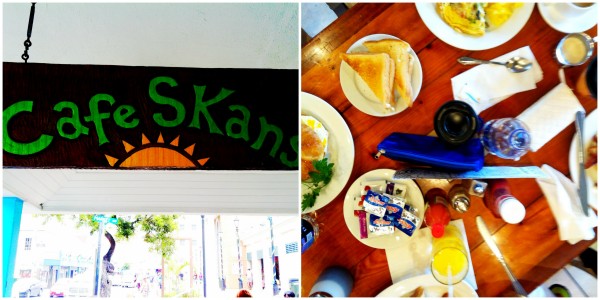 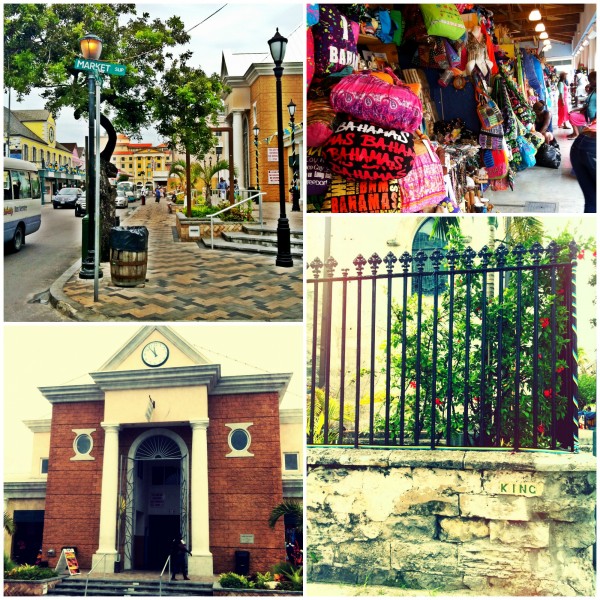 With the afternoon slipping away, we quickly jumped on the bus and headed back to the hotel to freshin’ up for de’ wedding! The ceremony was held on the hotel beach. It was slightly overcast, but a picturesque scene to watch two amazing people start their lives together. 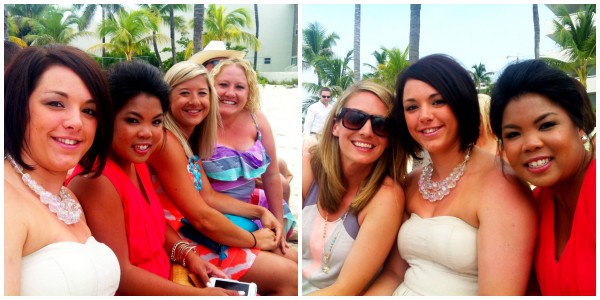 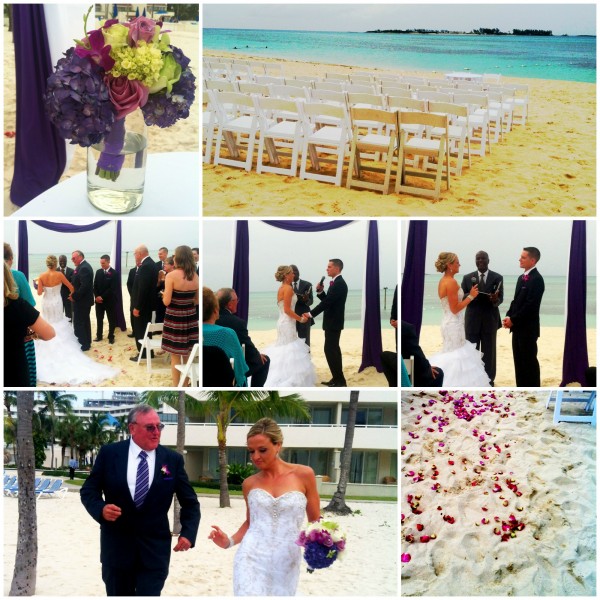 Now, Mel being the ever so funny character, started to walk slowly down the aisle with her father. But about halfway down, the music pepped up and they boogied to the front of the altar. Love that girl. The entire ceremony was straight out of a fairy-tale. Mel and Edgie both said their own vows and there wasn’t a dry eye in the house! 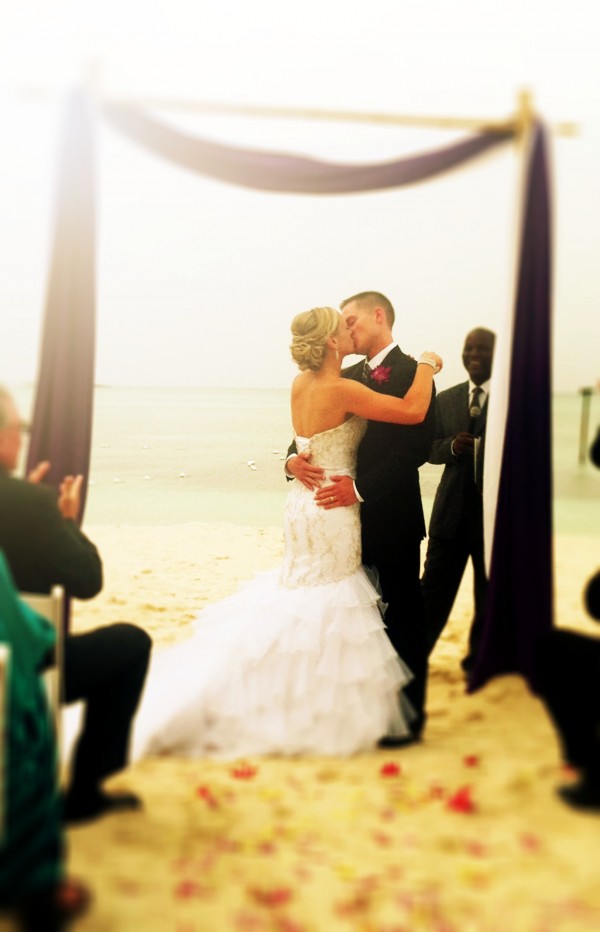 Following the ceremony was a cocktail reception on the beach along with group pictures. Hard to believe I’ve been friends with all these girls for almost 20 years! 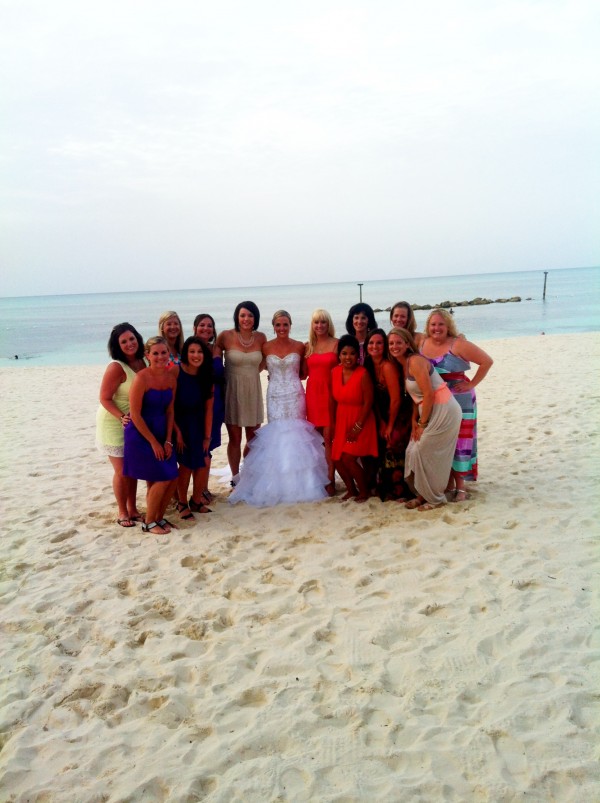 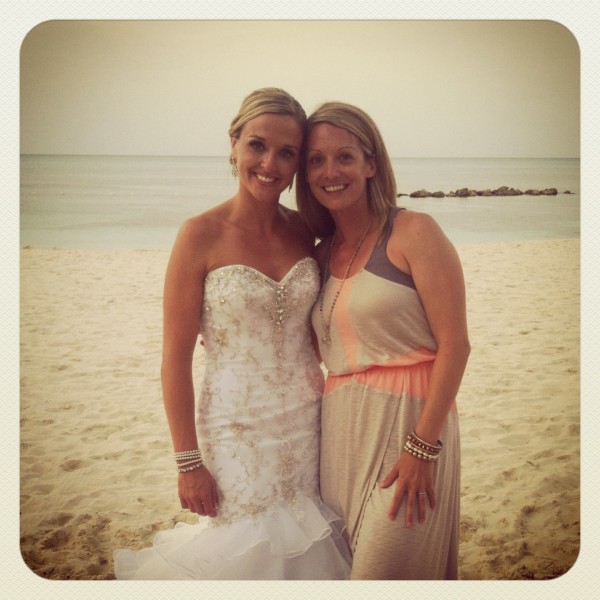 The reception was beautiful and held in the hotel ballroom. We ate, boogied on the dance floor, and soaked up all the wedding bliss.

And just like that, my trip in the Bahamas came to an end. I had an amazing time catching up with old friends, eating local food, learning about Bahamian culture, and seeing a good friend marry the man of her dreams.

Until next time, Nassau.