Subscribe now and get our FREE ebook: 10 Fresh Flavorful Dinners
Home » Travel » Colorado » Denver » Denver Village » up and back

January 30, 2012 (updated Jan 20, 2016) 0 comments »
Well friends that’s a wrap.
The final weekend of January has come to close.
Can you believe it? Where did the time go? Doesn’t it feel like we just celebrated New Years?
It’s hard to believe on Wednesday we will be entering the month of love, or more importantly my birthday month! Jazz hands. But before I start squawking about the best month ever, let’s recap our simple and delicious weekend, K?
Saturday morning Listy, Chance, AC, Mr. B and I headed up to Winter Park for the day to ski. AC, who works for CU athletics, had to make an appearance at Winter Park for the CU alumni ski day. He ended up having extra lift tickets and invited us to join him for the day. Thanks AC!
Since we were doing an up and back, we knew we had to get on the road early. I’m talkin’ 6:30am early. Gross. 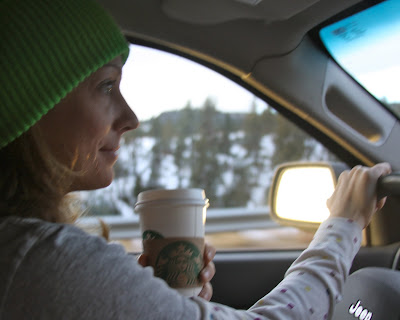 After grabbing an SBUX and breakfast burritos, we hit I-70 around 7:30am. Es no bueno. The highway was already a parking lot. Mr. B and I both commented that we haven’t seen traffic this bad sine we moved to Denver back in 2007.
Thankfully we decided to take the frontage roads, which saved us about 30 minutes. But still, they seriously need to put in a high speed train. Traffic is only going to get worse! 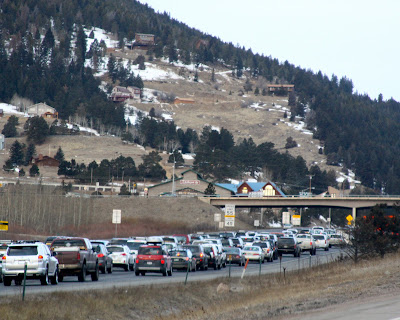 We eventually made it to Winter Park around 9am. The temperature outside when we arrived….8 degrees. Brrrrrrrrrrrrrrrrrrr. I told Mr. B that every time I ski Winter Park it’s either freakin’ freezing or blowing high winds. Saturday was little of both.
I will give Winter Park two snaps up because they do have free parking. Compared to $25 parking at Vail, it’s a dream come true.
We rode the gondola to the village. Chance was a little skeptical of the moving box, but he was a champ as always. 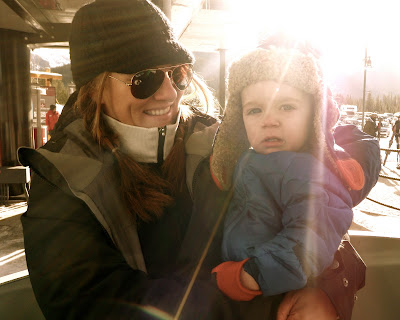 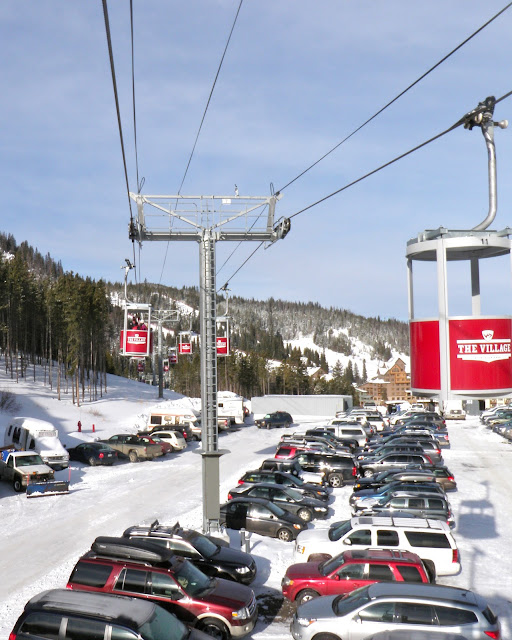 Listy and I watched Chance, while AC and Mr. B skied first. Chance is hysterical. He is so curious about everything. He found the simple napkin holder on the table fascinating. Seriously, how fun would it be to be a kid again? 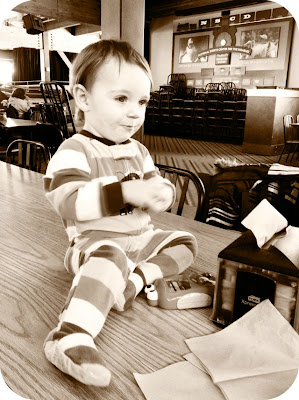 Once the guys were done skiing, Listy and I hit the slopes. We managed to get in a couple of runs, but lift lines were crazy long. Where did all of these people come from? 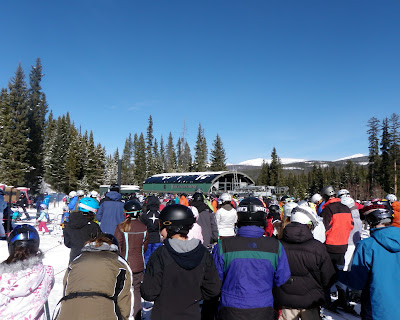 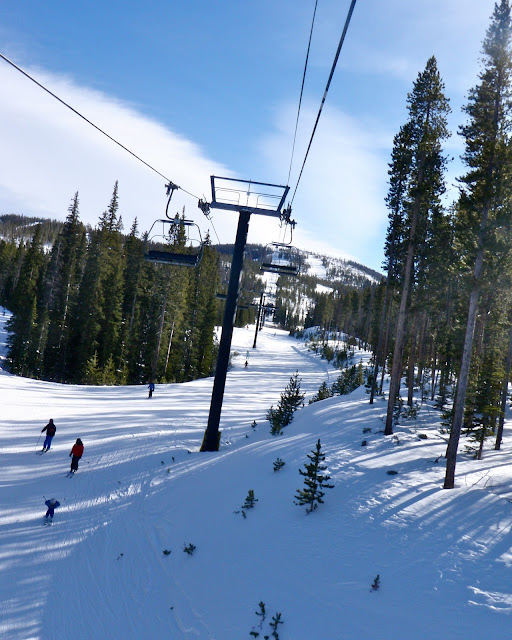 Since we don’t ski Winter Park very often, we decided to look at a map and figure out where to go. There were a bunch of blue runs over by Pioneer Express that looked promising and crowd free. And off we went! 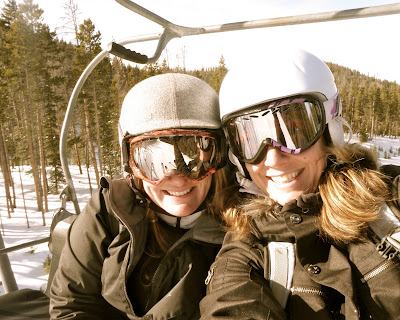 We were hoping to ski down Sundance, but it was roped off. Hmmmm….what to do? After looking at the sign for about a minute and contemplating what to do, a man dressed in a Columbia jacket straight out of 1992 came up behind us. He stated that we should follow him because there’s a way to cross over to Sundance midway down Gambler. He informed us that he was not an “expert”, but insisted we follow him.
Um, okay?
Listy and I started down Gambler. The moguls were icy and we both kept yelling…”unpredictable!” Thankfully the guy didn’t lie because he managed to lead us safely over to Sundance. Phew. We said thank you and then ripped down the blue. 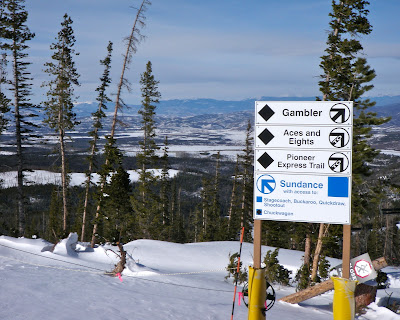 By the time we made it back up to the top of the lift, we had to get back to the base. The boys needed to be relieved…
Mr. B texted me: Help! Bottle! Stat!
Two seconds later, he texted again: Found it. Wow! (I concluded that Mr. B babysitting Chance was good practice for future. Am I right? Right.)
Listy and I made it back to the base, and Chance was perfect. We ordered a couple of Bloody Mary’s to celebrate the day and the boys stellar job babysitting. 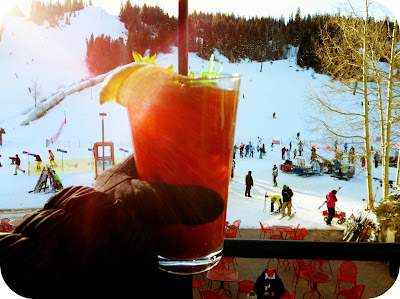 I can’t think of a better way to spend a Saturday afternoon than drinking a cocktail, slopeside with your friends. 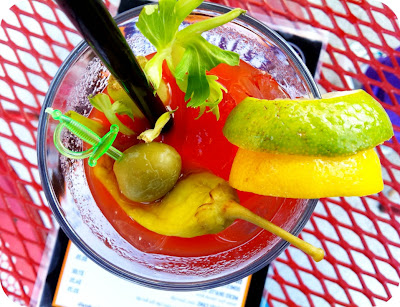 This morning, Mr. B and I slept in. I don’t know how we do it, but every weekend, no matter what time we go to bed we always wake up at 10am. Do you wake up at the same time on the weekends?
Anyways, instead of the usual Mona’s or The Market for breakfast, we ventured uptown to Steuben’s for brunch. We are both BIG fans of this restaurant. Their food is amazing – comfort food jazzed up. And the ascetic is chic modern with a vintage twist. 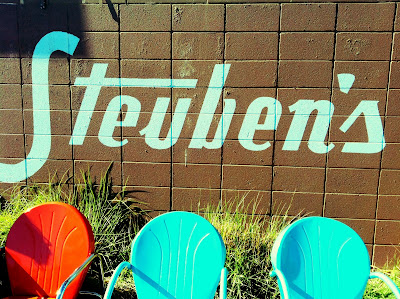 Mr. B ordered the sinfully delicious, chicken and waffles. O.M.G. Yeah, it was that good. I ordered the Steuben skillet that was full of potatoes, shrimp, cheese and peppers. 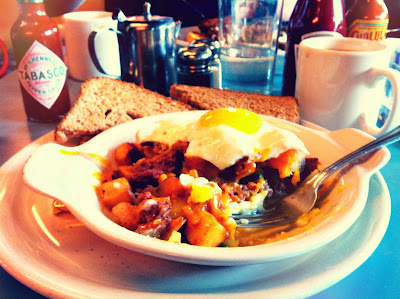 After brunch we headed back home. I had to work on some Foodie Friday stuff and pick up around the apartment.
Since the weather was gorgeous today (fifty-five and sunny!), I decided to go for a jog along the Platte River. It’s amazing what thirty minutes of exercise can do for the mind. I felt refreshed and ready for the week start when I was done. 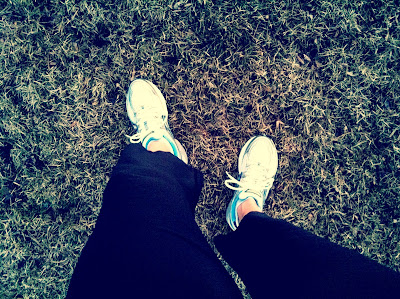 I was planning on going to the store and then hunkering in for the evening when Max called Mr. B and said he needed help moving his ski press. Oh yes, I said ski press. Max decided that paying for skis was highly overrated, and building your own was far more fetch.
Check it out!
(If you’re looking at this giant contraption with a puzzled face, don’t worry, I had the same look until Max and Mr. B explained to me how it all works. I’m pretty sure I still have a few thousand questions that need to be answered.) 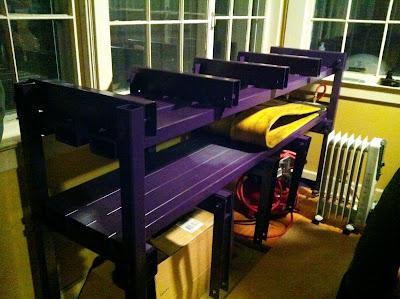 Max is still working on putting the final touches on the press, but hopefully we can put in an order soon!
Alright, we just arrived back home from the Lehman’s, and I am going to hit the hay.
See ya!
Colorado Denver Village High Country Snow Skiing Travel