Whoever came up with it gets like 50 gold stars! 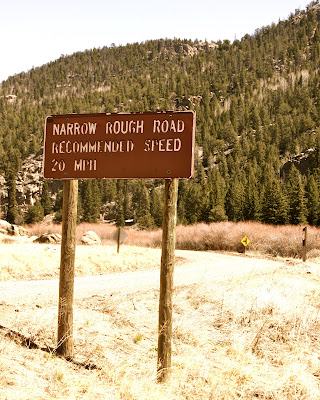 A couple of weeks ago, Mr. B and I managed to sneak away for an afternoon and headed down south to Eleven Mile Canyon in Colorado Springs to do a little flyfishing. Did you know that I fly fished? Yep, yep. I first learned how to fly fish three years ago through a class put on by a local fly shop here in Denver.  I knew nothing about fly fishing. Zilch. Nada. The only fishing yours truly had ever attempted was the kind where you sit in a lawn chair with a pole in thewater while you sip beer or take a nap and get sunburn. I believe they call itpond fishing? 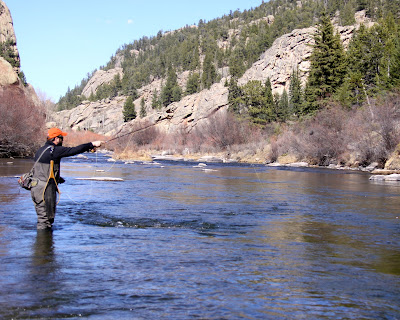 Needless to say I had a lot of work ahead of me. I had to learn how to put on waders, thread a rod, and tie knots. By the way, learning how to tie a knot is one the hardest freaking things on the planet to do because it requires patience, ofwhich I also have zilch and nada. (Unless it’s a chance to catch a glimpse of Ryan Gosling. For that, I will wait a century. Um, and if not Mr. Gosling himself, could I at least get a glimpse of something he’s touched or lookedat? Pretty please?) 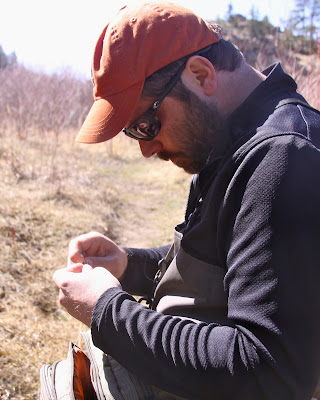 Where was I? Oh yes. Knots. Besides learning how to tie microscopic knots, you must master the art of casting. …Do wha? All I’m going to say is that there are two kindsof basic casts – 1) a roll cast, and 2) over the head. And yes, they were both totally over my head when I started. Casting gets pretty technical and takes alot of practice. (For the record, if there was a tree catching cast, I would have won first place immediately.)
Anyways, given all that information, you can see why a lot of people wouldn’t want to participate in the sport. And you’re probably wondering, why on earth I would even want to subject myself to such insanity? But I can honestly say,when you’re standing in the middle of a stream and all that surrounds you are giant, green pine trees and the clear, blue sky, you find peace. Nature has a funny way of reeling us back in and reminding us of the simple pleasures in life. That’s why I haven’t quit.
Although, I can’t lie. I almost did. 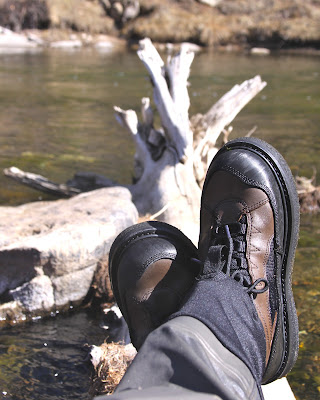 I mentioned earlier that I have been fly fishing for over three years. Do you know how manyfish I caught in that time? Z-E-R-O. Oh, I know, it’s major crazy town. That’s like playing basketball for years and never scoring a single basket. Why keep playing? Well, I was beginning to think the only way I would be a part of the fly fishing community was to take a “supportive” role. (read: sitting on the bank soaking up rays of sun while telling Mr. B he was doing great).

But everything changed one Saturday afternoon. We didn’t hit the stream until well after lunch because I’m still slower than molasses at tying knots.Thankfully, Mr.B has the hands of a surgeon and was able to tie the knots quickly. He also has the patience I don’t have – remember, marry people who have good traits that you don’t have! 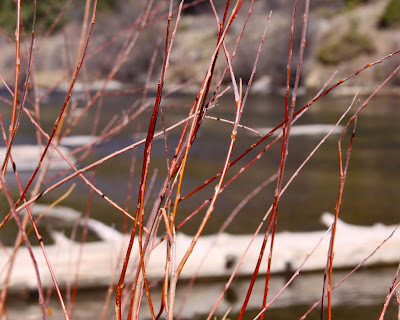 As soon as we stepped into the stream, what seemed like a dozen trout came swimming up to our ankles. I couldn’t believe. The fish down the stream were jumping in the air trying to eat anything and everything. I told myself, today is going to be the day. I threw my line out and immediately got a strike, but nothing hooked. This went on for another hour or so, and once again I started to feel deflated. I eventually lost my fly on my line, so I stomped over to where Mr. B was fishing and switched rods with him so he could fix mine (Isn’t that a great system?).

I waddled back to my fishing spot, threw an over-the-head cast, and with in two seconds I was screaming at the top of my lungs, “FISH! FISH! Mr.B, FISH! MOVE YOUR ASS AND GET A NET!!!” I couldn’t believe it. I kept reeling the line, still yelling my head off. Clearly Mr. B thought I was going to loose it (and the fish). But I didn’t. 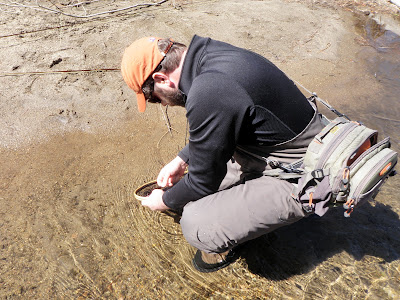 Mr.B managed to make it over just in the nick of time and helped me put the fish in the net. I had him take the hook out of the mouth and make sure poor Mr. Fishy wasn’t hurt. (By the way, isn’t it hilarious and ironic that people do this? We tryreally hard to hook a fish, and then once we do, we’re like, I’m so sorry I hooked you! I hope you’re not hurt!) Have you ever touched a fish? Gross-slippery-city, folks. I thought I was gonna throw up – this guy smelled horrible and was extra slimy. Mr. B told me to pose with Mr. Fishy, and I was hesitant at first, but I knew I had to in order to officially be a part of the fly fishing club.
I definitely had a Kung Fu grip on the poor scaly guy, but I was so excited I didn’t care. I had finally caught a fish – a 14-inch rainbow trout, to be exact. 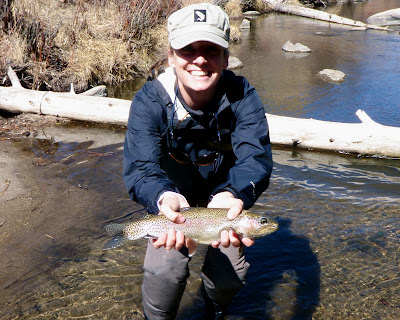 After we took thepicture, we gently placed the fish back into the stream. I’ve never been more proud of myself. It may be another three years before I catch another one, but that moment will live with me forever.
Of course, I recommend fly fishing to anyone who’s considering it. But, I also recommend anything that brings you back to nature for a day, or that helps you spend good, quality time with your sweetheart. And if you’ve been working on somethingfor three years with no success, and you’re thinking about giving up, I certainly recommend that you keep on fishin’.
Fly Fishing Yours Truly