Mr. B and I have started the second season of Mad Men. 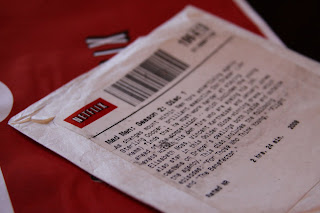 I know. We are a little behind, seeing that they just started the fourth season in July of this year. But this show is absolutely addicting.

Between the characters, conversations, clothing, etc. you can’t help but love the way life was back in the 60’s. If you have not watched the show, I highly recommend it!

Anyways, I thought I would share some of my favorite quotes from Season One:

Betty Draper: “Honestly-I think she’s jealous of me. I’ve seen it before, I was in a sorority ”

Pete Campbell: A man like you I’d follow into combat blindfolded, and I wouldn’t be the first. Am I right, buddy? Don Draper: Let’s take it a little slower. I don’t want to wake up pregnant.

Don Draper: We should get married. Midge: You think I’d make a good ex-wife?

Harry Crane: Draper? Who knows anything about that guy, no one’s ever lifted that rock. He could be Batman for all we know.

Roger: I bet there were people in the Bible walking around complaining about kids today.

Marge: What are you doing? Don’t ever put your name on a list. They keep track of everything we do here! Have you never heard of Joseph McCarthy?
Lois Saddler: It’s the bowling team.

Are you a fan of Mad Men? Who is your favorite character of Season One?