I hope you had a wonderful and relaxing weekend. Before I get to this weekends recap, I want to say thank you to all the women and men in the armed forces. Without your service, dedication, and sheer bravery, our country would be lost. Thank you for defending this country with the up most grace and protecting our freedom. As a U.S. citizen, I can’t thank you enough.
Well, it’s official, friends! Summer is here! Whoo-hoo! I can’t think of a better way to kick off summer 2012 then with a weekend playing in the mountains with your friends. Katie, Kevin, AC, Mr. B, and I began our mountain vacation by venturing up to Estes Park on Saturday. The boys were itching to fly fish in Rocky Mountain National Park, while the girls wanted to soak up some rays of sun.
Hmmm…where to go?

The answer: Sprague Lake – a beautiful high mountain lake tucked deep inside the national forest. I wonder if this is what heaven looks like? 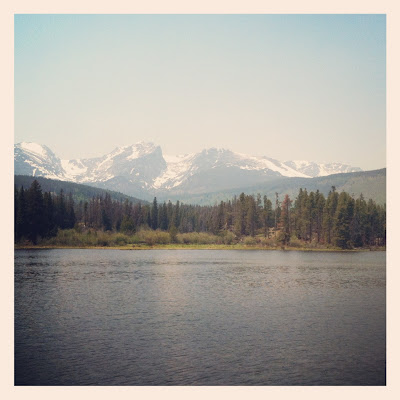 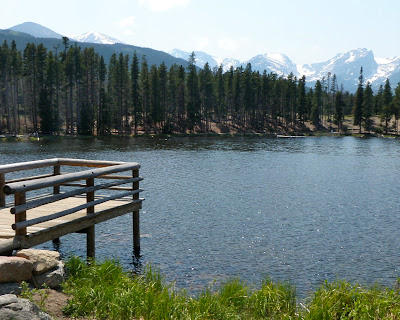 We found a nice cozy spot on the shore were we could sprawl out and take in the scenery. The boys posed for Norman Rockwell as they geared up. 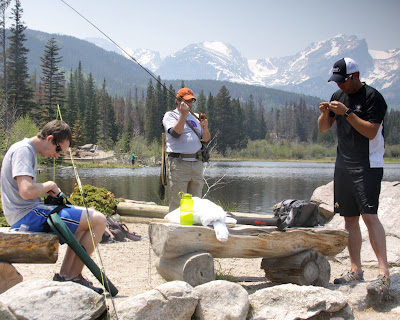 Katie and I relaxed by the rocks, and provided some much needed moral support to the guys because the fish weren’t biting. 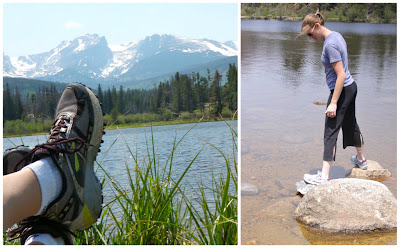 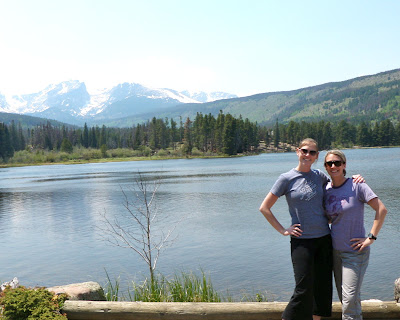 After about an hour of not landing a single fish, the guys felt a stream would be a better option. Well, I think the fish must have sent out a memo because they didn’t catch anything on the stream either. Good thing they weren’t trying to catch dinner! 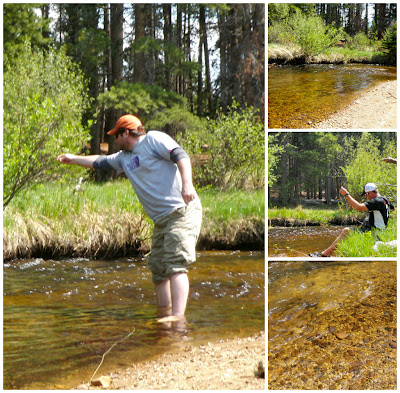 In order to get to Avon (where we were staying), we had to travel through Rocky Mountain National Park. The views were breathtaking! Snow covered rugged peaks and green rolling meadows…perfect for a photo shoot. 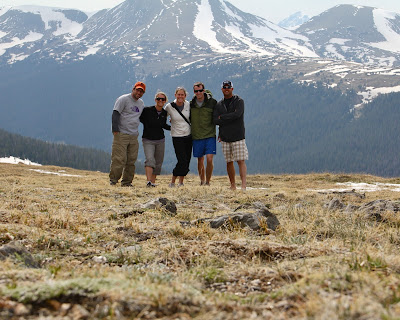 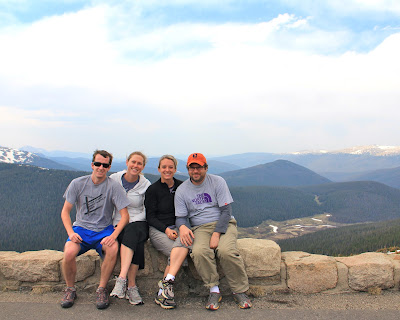 Oh, I almost forgot! We saw a wild moose on the drive! Major crazy town. 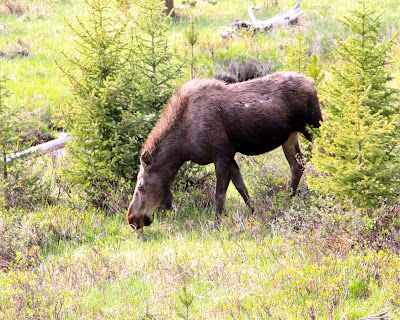 We stopped in Dillon on the way back to grab some grub and cheers to the weekend ahead. Mr. B and I are very lucky to have adventurous and hysterical friends. We made it to the condo and ended our evening playing a game of…. 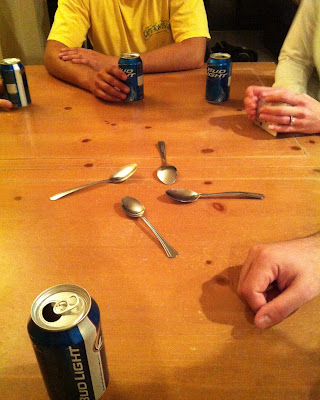 The weather on Sunday wasn’t ideal – windy with a high of fifty. But that wasn’t going to stop us from having fun! The boys decided to fish again, while Katie and I headed over to the Blues, Brews, and Barbecue Festival in Beaver Creek Village. 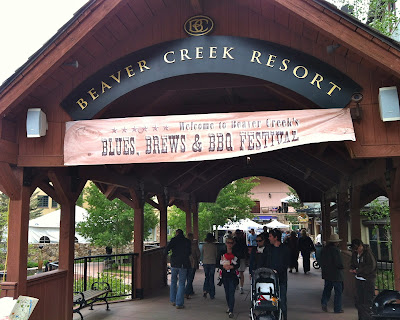 The village smelled of smoked ribs, barbecue sauce, and cold beer. Could this be my new happy place? We bought commemorative beer mugs and tickets for food sampling. 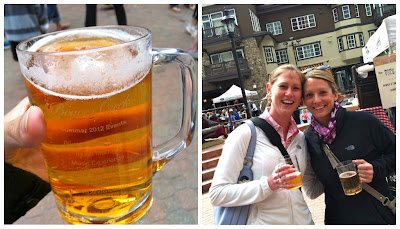 I about peed my pants when I saw that Beano’s Cabin had a sample tent. Note to Mr. B: I would like to take a sleigh ride to the cabin and have dinner there for my birthday next year. K? Thanks. 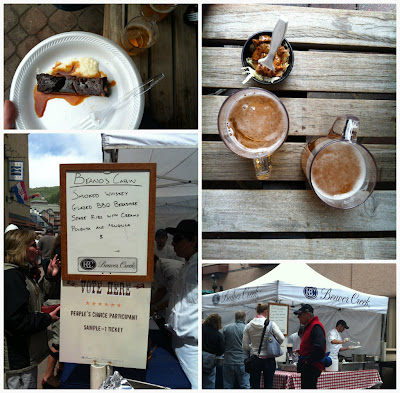 Their ribs were AH-mazing. Fall off the bone with some cheesy grits to wash it all down. Katie and I were in foodie heaven. We walked around to a couple other booths and tried some Korean barbecue and regular pulled pork, but we definitely gave our coin to Beano’s Cabin. Sadly, they didn’t win the tasting competition. Rats.
The guys showed up shortly after, and needed beer/barbecue ASAP. Ribs anyone? 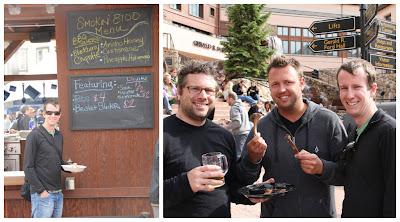 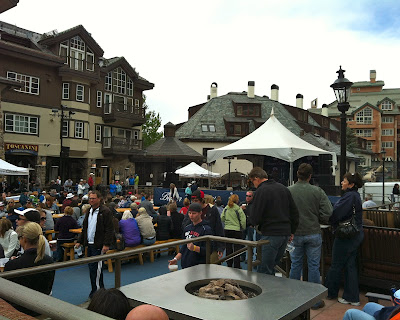 The festival ended at 6pm and with the weather finally warming up, the guys decided to do some more fishing around our hotel. 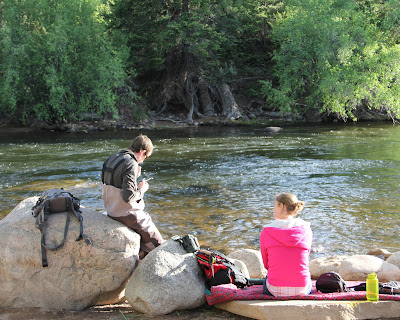 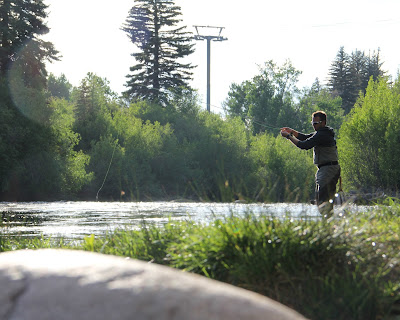 Katie and I took it upon ourselves to set up camp along the bank. Blankets, check. Coat, check. Nalgene bottle full of champagne, check, check! We giggled and gabbed as the guys waded in the cold water. Poor things, they still never caught a fish! 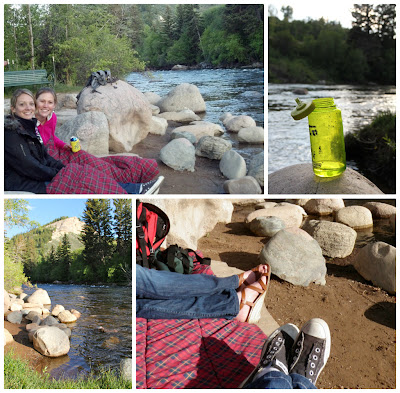 Once the sun set, we felt dinner was a necessity. We walked from our condo to the Blue Plate, and made it just in the nick of time because they were about to close. Thankfully the chef decided to keep the kitchen open! Score.
We shared a couple bottles of wine, a cheese fondue, and two entrees – shark and steak! 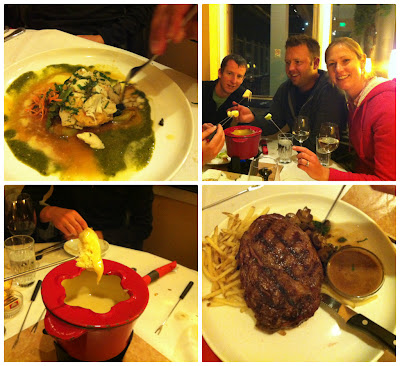 Today we slept in. I don’t think anyone moved before 9:30am. Once we were all up and moving, we moseyed over to Cafe Milano for brunch. Between the five of us we ordered a variety of different things off the menu. Biscuits and gravy, French toast, and Eggs Benedict. Basically anything that would cure a hangover. 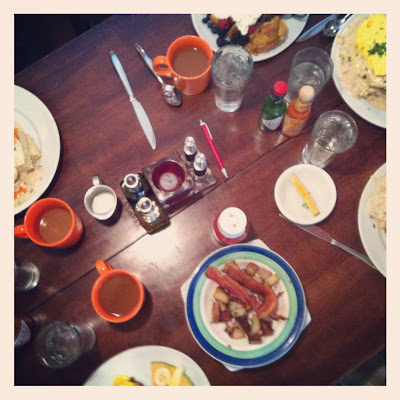 After brunch we headed back to Denver to beat the holiday traffic and meet up with the rest of the village at Wash Park for a little volleyball action.

As Mr. B and I were walking up to the park, the air smelled of grilled hamburgers and beer. I turned to Mr. B and said, “The park smells like America.” 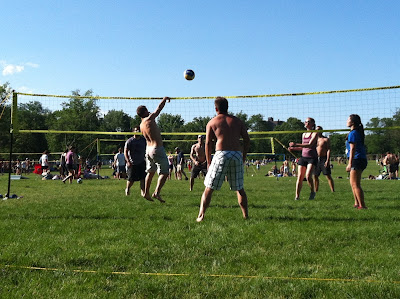 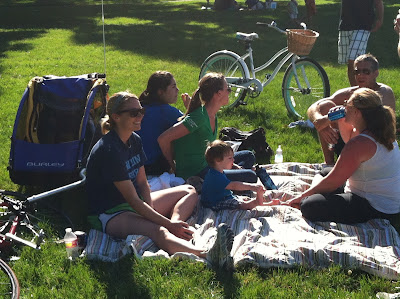 We hung out in the park for a couple hours and then headed over to the Lehman’s for a backyard barbecue.

The menu for our Memorial Day feast:
– Brats
– Burgers
– Strawberry salad
– Chips and Queso
– And lots of cold, tasty beer and wine! 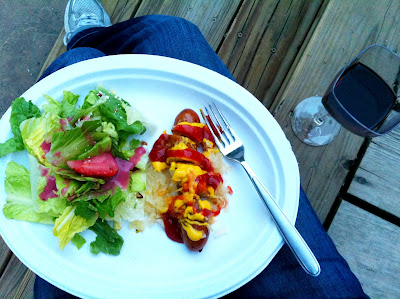 This weekend was fantastic! Even though I am exhausted, I’m definitely ready for summer. Hope you had a great holiday weekend.