I am so very happy to see you.

As I mentioned earlier this week we were planning on heading up to Estes Park to see Chris’s sister get married. Sadly, Chris had to stay in San Diego to work so Mr. B and I won’t be heading up there. Why does work have to ruin everything? Geesh.

Since we aren’t traveling this weekend, I ended up running my final long run this morning. My training plan called for twelve miles and I was a little nervous given Mondays almost near death experience. 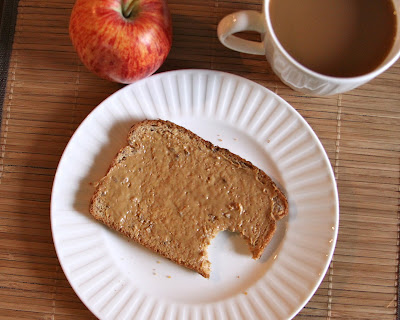 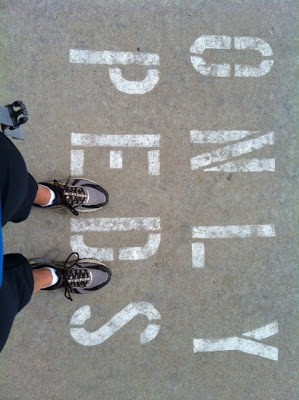 breaking in my trail shoes.

The first six miles were slow. I wanted to make sure my stomach and legs were okay because lately both have been pissed. No clue why? I guess it’s just the joys of running. Thankfully the last six miles were better and I actually made up time.

By the end, I was a sweaty mess.

I am keeping my fingers crossed that this trail run doesn’t kill me. Running a half marathon at 10,000 feet is a little intense to say the least. 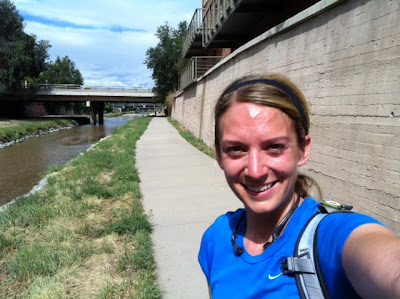 hot pocket!
After my run, I promised Mr. B that I would go to Kiowa and do some clay shooting. Isn’t that what all married couples compromise about? Honey, if you let me run double digits in the morning, I will shoot with you in the afternoon. That’s normal, right?
No?
Fantastic.
Anyways, before we headed to Kiowa, we scarfed down lunch.
Tortilla, smoked mozzarella cheese, grilled chicken, shallots, jalapenos, mayo/mustard, and arugula….delish! 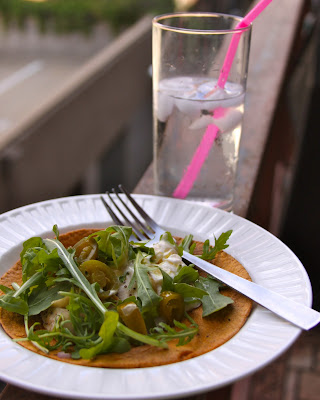 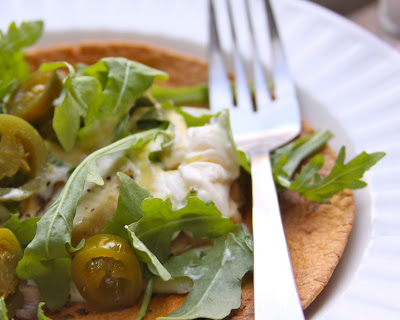 wait. jalapenos complete a meal. duh!
Once we arrived at Kiowa, the weather wasn’t looking so hot. There was only a 10% chance of rain, but it drizzled the entire time we were shooting.
We still had a blast, and we both got to shoot Mr. B’s new shot gun.
Guns + clay shooting = happy husband 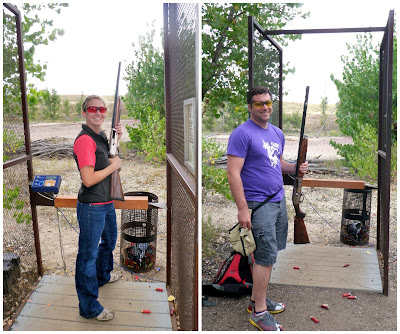 til death do us part. 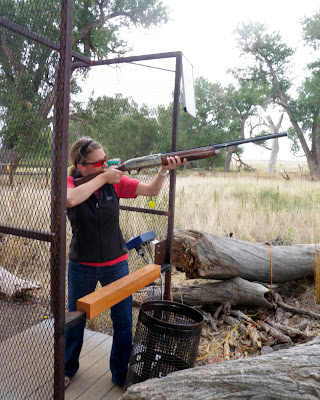 complete professional.
Even though Mr. B says I’m a “natural”, I still get nervous around guns. Not to mention after several rounds of shooting my shoulders start to hurt from holding the gun and the kickback. Remind me again why people do this for fun?
We headed back home around 5pm to watch K-State play Kent State. I couldn’t believe the game was on T.V. Yippee!! 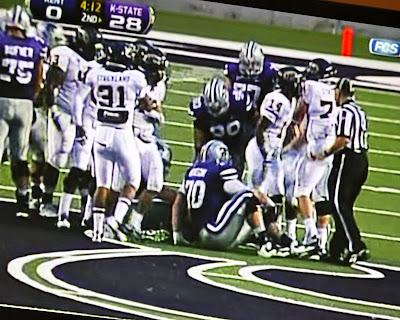 go cats!
So I enjoyed a cocktail as we cheered the Cats on to victory. Mr. B said this was the first shut out game in five years. Way to go Bill! 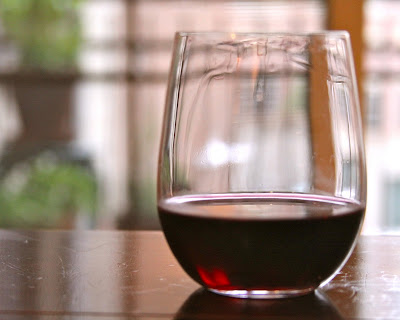 i heart you malbec.
Mr. B and I were pretty content on watching football and staying in for the night, but then I received this text and picture from Listy:
“Boooooooo!” 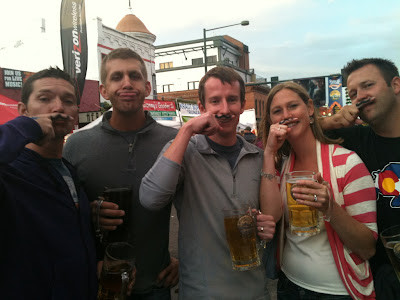 Everyone was at Oktoberfest, which was right down the street from our apartment. I took one look at Mr. B and said that I was going. He wanted to finish watching the game and said he would meet up with me later.
Peace, babe.
10 minutes later….
Hello, Oktoberfest! 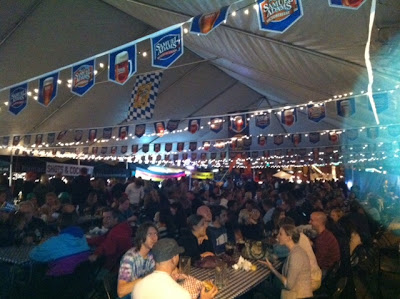 oktoberfest!
It didn’t take me very long to find everyone, but when I did….mustaches and beer was the first order of business. 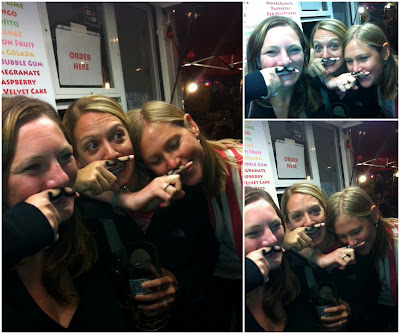 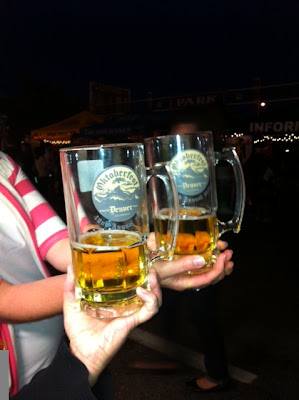 a beer for the lady… 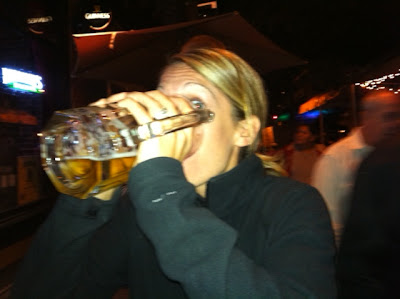 chug!
We stayed at Oktoberfest just long enough to get into some shenanigans and to grab a slice of pizza. I was starving! 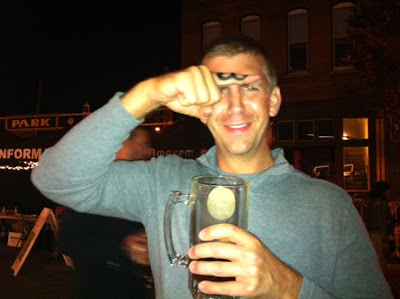 the unibrow.
We left Oktoberfest and headed to the Tavern Downtown for a little rooftop action.
Coors Field is so pretty at night. 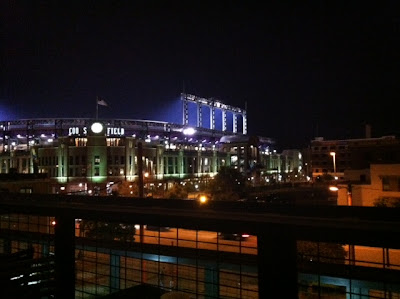 go rockies!
And so are Katie and Kevin. 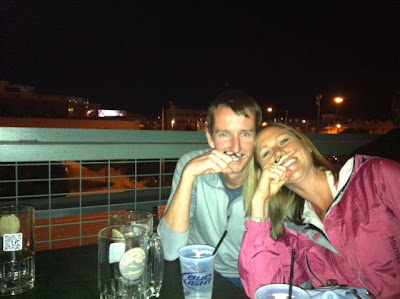 one and a half mustaches.
Wait. Definitely Listy and I. 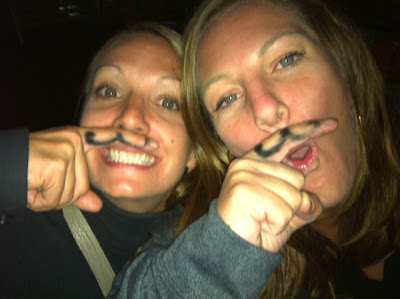 sexy, sexy.
Mr. B did end up meeting us at the Tavern for a couple drinks. But by that time everyone was far into the giggle juice.
We didn’t stay out much longer because I was exhausted.
Tomorrow is going to hurt.
Denver Denver Village Running

« Previous Postfoodie fridays: shrimp and grits
Next Post » soup for the soul