Stud Muffins vs. Pitches Be Crazy

Mr. B is back!! Poor guy, literally just touched down from Chicago about an hour before we had to play kickball but he made it! Tonight’s game was super fun, until the 5th inning. Pitches Be Crazy was a very chill, let’s have fun, just drink some beer kind of team…or so we thought. The game was pretty typical for the first four innings. Three up, Three down. They scored, We scored.

But, at the top of the 5th inning things went south. We started scoring runs and then the ref made a bad call according to them about Bret not tagging up and Megan not being out for touching a ball while running to 3rd base, which scored a run. Then one of our players got fired up about a questionable head first slide that he was called out on. The claws started to come out. The next two innings were a little intense, with everyone nit picking every call or situation. Aaaannoying. Not to mention we were only up by one run!

So, the only thing we Muffins know how to do is to bear down and make it work. Not only did we win but Max our 3rd baseman fielded a ball by kicking it to our 1st baseman and getting the girl out. ESPN Sports Center, top ten fo sure! If this was the 1800’s, I think Pitches Be Crazy would have started shooting saloon style after that play.

Finally, an action shot of me kicking the ball!
Mr. B on second 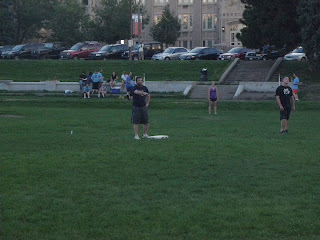