Sunday was another beautiful day in Colorado. Bret and I got up early, well the alarm went off at 7am but we didn’t get up until 8….what can ya do. We were planning on going for an early trail run but we were so de-hydrated from the previous night at Drew & Tina’s that we decided to go later. So, we got up and did our normal weekend morning routine. Checked the news, had some coffee and made breakfast burritos…YUM,YUM. FYI, toasting the tortilla on a skillet makes the biggest difference in taste value….highly recommended.

Since we are starting to train for the Aspen half marathon, Bret thought we should get trail running shoes. I ran the Aspen half two years ago and apparently missed the memo on what to wear, because I showed up to the race in my cute Nike running wear and shoes and stuck out like a sore thumb. Everyone that was running the race looked like Ted Kaczynski….and I looked like Barbie. So, this year Bret read the memo or remembered me complaining about slipping on the trail, and off we headed to Runners Roost our local running store here in Denver.

We arrived at Runners Roost right when it opened and it was a circus. There were people every where!! We looked at each other and thought maybe this is a bad idea, but stayed and eventually got some help. I picked out some Brooks trail running shoes and got lucky on the first try because they fit perfectly and I was sold.

Poor Bret had to keep explaining to the tween what he wanted, and I swear she brought out the exact opposite each time. “Oh, you wanted less correction in the shoe, well…here is a shoe with like a totally killer 2 inch support system, what do ya think?” Basically after 30 minutes he finally found some…thank god, it could have gotten ugly!!! (SIDE NOTE: Bret made a good point.Always question a 17 year old that is working at a running shoe store and trying to fit you, because YOU ultimately know what feels good on your feet not them…like totally.) 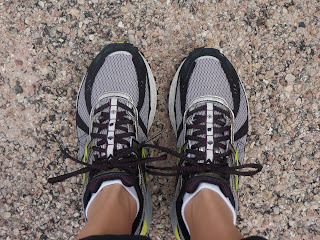 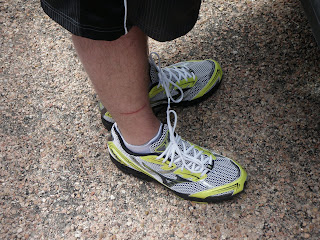 We left the parking lot and started on the trail around 12:30. The weather was partly cloudy and cool, perfect for running. We ran about a mile and a half in the meadow and started uphill. I don’t care how good of shape you are in, running up a side of a mountain sucks serious balls. After Runners Roost we headed to Evergreen, which is about 25 minutes west of Denver, to a trail head called Elk Meadow.

Now, on the trail map the loop looks about 5 miles.We thought not bad, we can jog on the flatter parts and hike the switchbacks, it really shouldn’t take long. (SIDE NOTE: we did not bring our camelbaks because we thought we would be done sooner and close to the car if we needed anything, this was a “bad idea jeans” moment.)

The meadow we started the trail on… 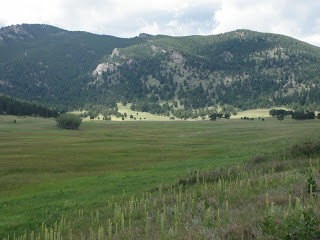 Action shot of me on the trail….so serious! 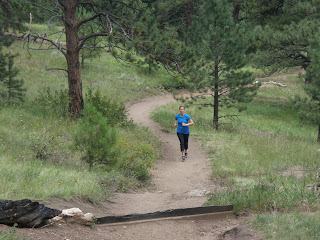 Not a bad view of the hubby:) 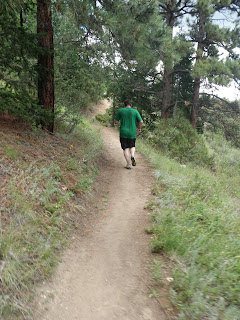 It took us about 30 minutes to get to the fork in the road , where we originally planned to turn but decided that we needed to see the peak of trail. Well, we thought it wouldn’t be that far, not true. By the time we reached the peak, it had been two hours!

Half way up to the Peak… 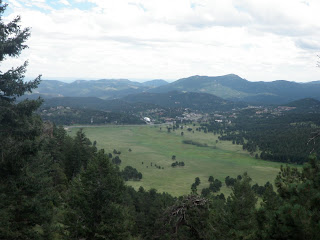 Cool shot of the trail on our way up… 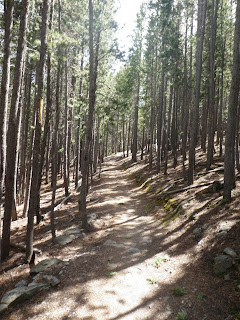 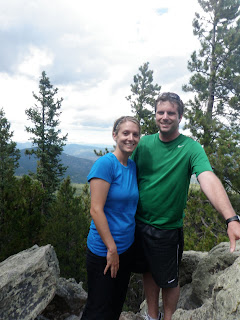 Finally at the PEAK!!! 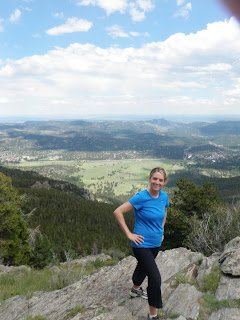 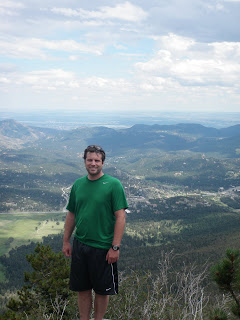 Feeling a sigh of relief after we reached the peak, in that we would now be going downhill, we decided to make a run for it since we were getting pretty thirsty. We actually made good time coming down, but had to stop mid way because running downhill is much harder on the legs than going up. When we stopped of coarse it started to rain, and seeing that we were getting close to the end we tried to run again. That didn’t happen. Our legs were on fire! We walked the last 20 minutes back to the car in the pouring rain, tired, thirsty, and dying to be done!

If you look closely, you can see Bret in a green t-shirt running to get the Jeep in the pouring rain, as I stayed under the hut…smart move, that’s some serious rain! 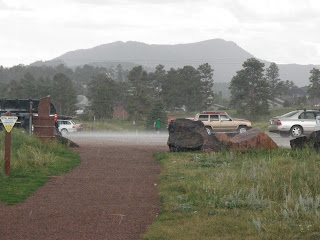 Here comes Bret in the Jeep to save the day! 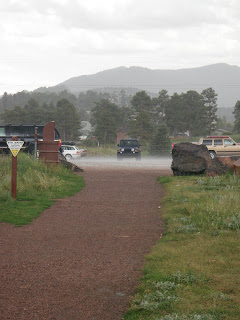 Now that is what I call, taking one for the team! P.S. Nike Dri-Fit clothing, actually works:) 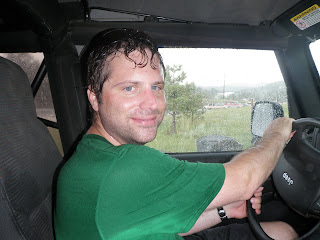 Needless to say we made it out alive but not without ending it on a funny note. I grabbed the trail map on the way out to see how far we went….I looked at the map, and the trail we were on said 3.7 miles. My legs didn’t feel like we just did 3.7 miles. Well, if you look closely you will see that the 3.7 miles is where it junctions with another trail….so dumb! This is why I don’t read maps. Bret took the trail map from me and started counting the mile markers on the bigger part of the map, we hiked/ran almost 11 miles!!!!! I was way OFF!! 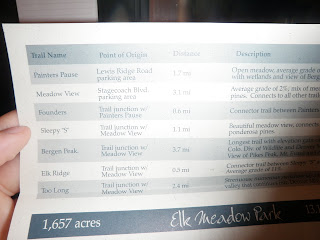 You actually have to look at the whole map….such a ra-tard!! 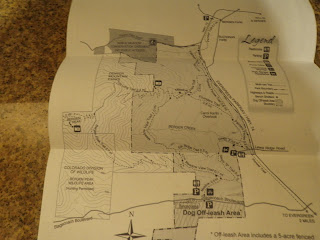 After heading to the grocery store to buy 10 gallons of Gatorade and water, we made it home. Tired and hungry, we ordered our favorite pizza from Wazee Supper Club, watched True Blood, and cuddled on the couch. 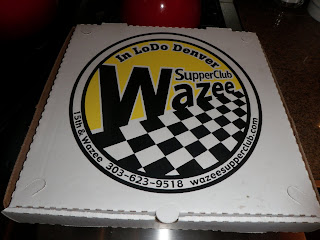 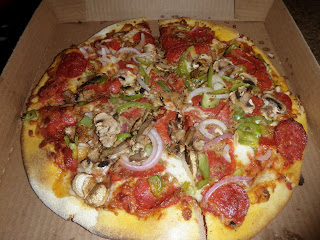 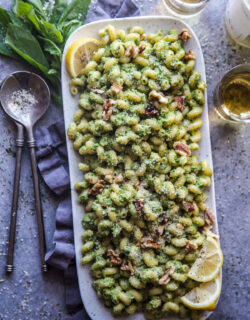